The rotating tubular chamber has been designed to allow seed and culture processes on tubular scaffolds by means of the rotation while culture media is circulate through the lumen and around the external surface of the scaffold. The combination of the rotation movement with the TEB series constitutes a full system for tissue engineering research with tubular scaffolds.

This chamber can be used in combination with the TEB series, which allows developing:

Also culture media in the outer surface of the scaffold can be pumped through an external circuit.

The lumen diameter of the scaffolds used in the chamber can be as small as 1 mm o lower and the useful length can vary from 5 to 15 mm.

Capillar vessels and small tube-shaped organs subjected to luminal flow are good candidates to be culture in this chamber, which is suitable to apply flow conditions and rotation simultaneously. 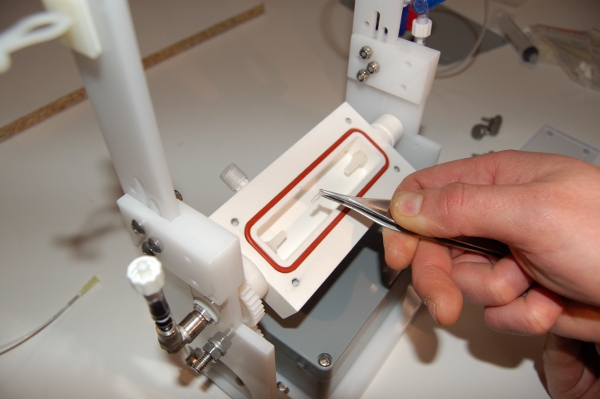 Tubular chambers have been designed to allow developing cell cultures on cylindrical scaffolds mimicking the effect of flow caused by, e.g., by the blood flow on arteries and veins. Thus, vascular scaffolds are good candidates to be used with this type of chambers, although any other tube-shaped scaffolds or organs can be also cultured in this chambers (trachea, esophagus, etc.).

These chambers allow the user to create two independent flow circuits. The internal or luminal one is intended to circulate culture media through the lumen of the scaffold in order to simulate, e.g., the blood flow circulation, whereas the other one allows the user to circulate culture media around the external surface of the scaffold. Both circuits are not independent and are not connected to each other, which makes possible to use different culture media in both circuits. Co-culture experiments with different media types can be easily performed with these chambers.

[*] Other possibilities available upon request.